The science everyone needs to know about climate change

With the United Nations’ climate conference in Scotland turning a spotlight on climate change policies and the impact of global warming, it’s useful to understand what the science shows.

I’m an atmospheric scientist who has worked on global climate science and assessments for most of my career. Here are six things you should know, in charts.

The primary focus of the negotiations is on carbon dioxide, a greenhouse gas that is released when fossil fuels – coal, oil and natural gas – are burned, as well as by forest fires, land use changes and natural sources.

The Industrial Revolution of the late 1800s started an enormous increase in the burning of fossil fuels. It powered homes, industries and opened up the planet to travel. That same century, scientists identified carbon dioxide’s potential to increase global temperatures, which at the time was considered a possible benefit to the planet. Systematic measurements started in the mid-1900s and have shown a steady increase in carbon dioxide, with the majority of it directly traceable to the combustion of fossil fuels. 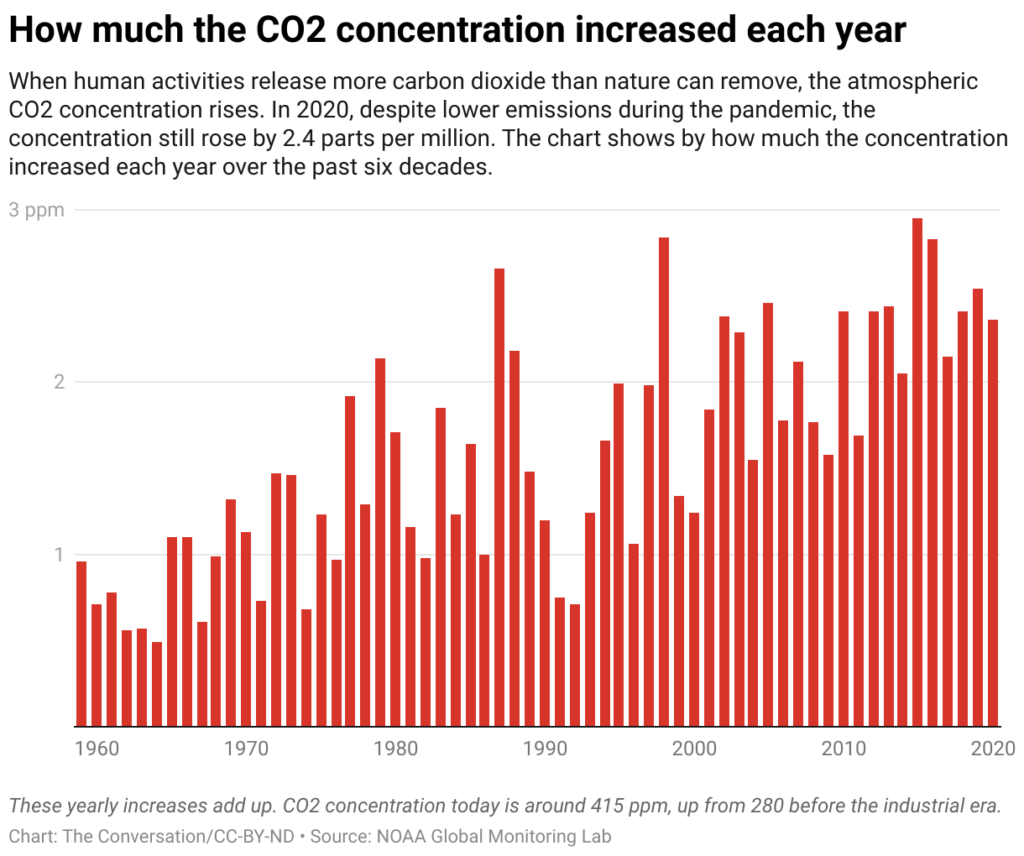 During the first year of the pandemic in 2020, when fewer people were driving and some industries briefly stopped, carbon dioxide emissions from fuels fell by roughly 6%. But it didn’t stop the rise in the concentration of carbon dioxide because the amount released into the atmosphere by human activities far exceeded what nature could absorb. 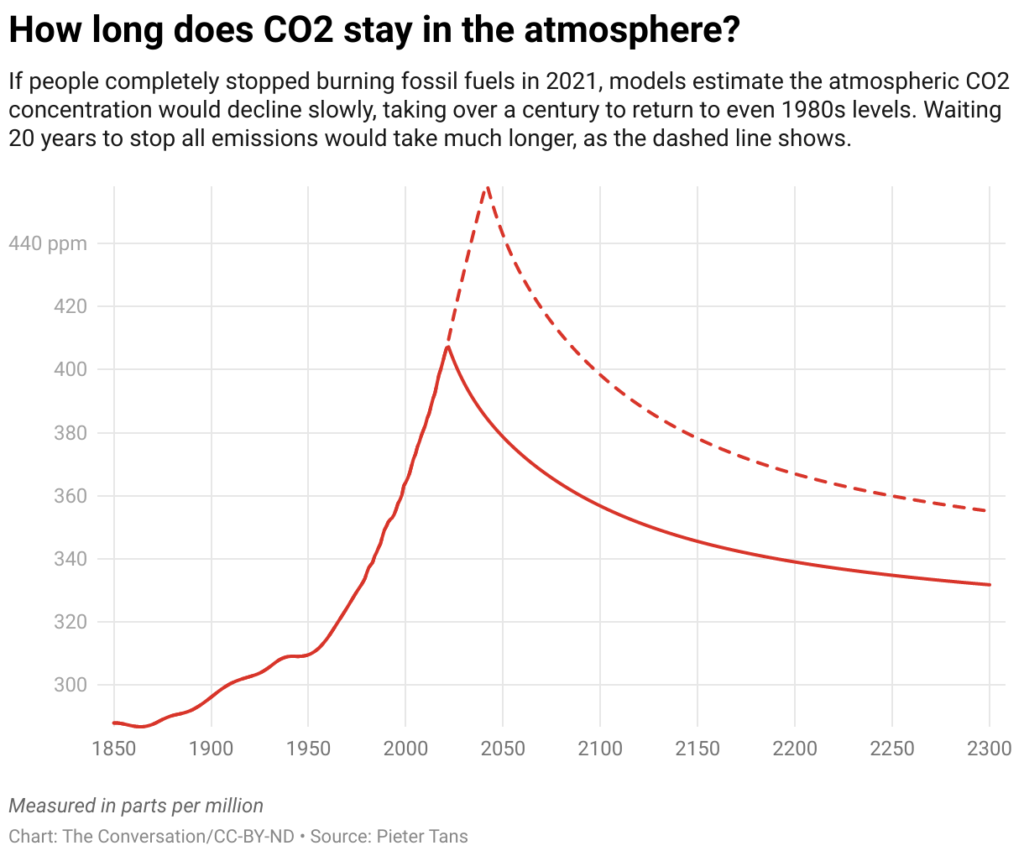 How we know greenhouse gases can change the climate

Multiple lines of scientific evidence point to the increase in greenhouse emissions over the past century and a half as a driver of long-term climate change around the world. For example: 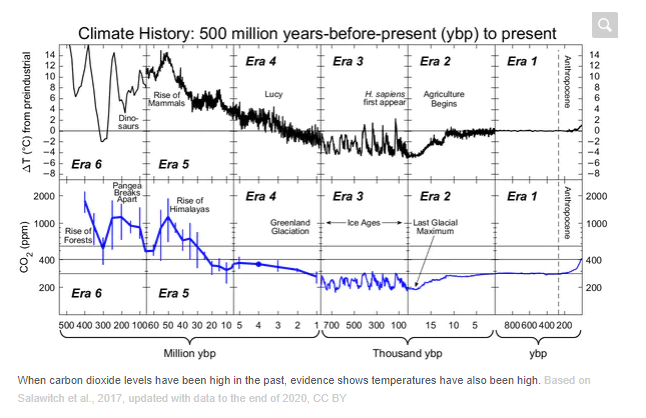 What climate change is doing to the planet

The rising temperatures are evident in records from every continent and over the oceans.

The temperatures aren’t rising at the same rate everywhere, however. A variety of factors affect local temperatures, including land use that influences how much solar energy is absorbed or reflected, local heating sources like urban heat islands, and pollution.

The Arctic, for example, is warming about three times faster than the global average in part because as the planet warms, snow and ice melt makes the surface more likely to absorb, rather than reflect, the sun’s radiation. Snow cover and sea ice recede even more rapidly as a result. 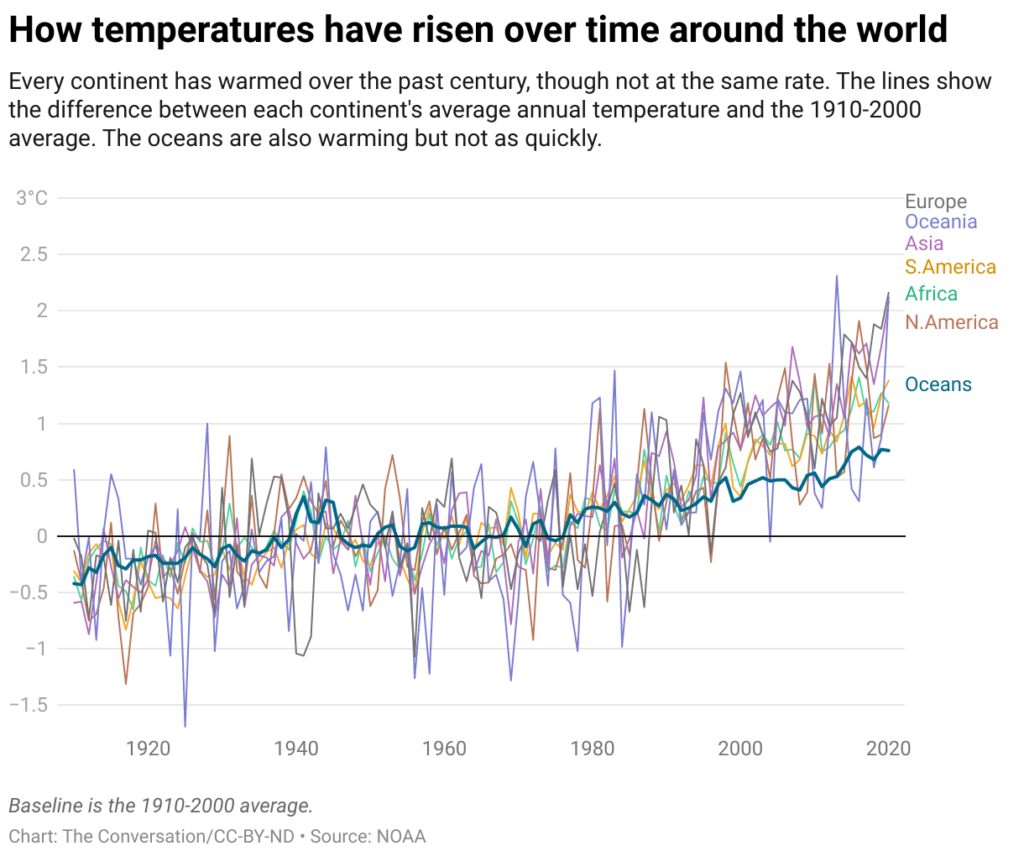 Earth’s climate system is interconnected and complex, and even small temperature changes can have large impacts – for instance, with snow cover and sea levels.

Historical records of ocean water level have shown mostly consistent increases over the past 150 years as glacier ice melts and rising temperatures expand ocean water, with some local deviations due to sinking or rising land. 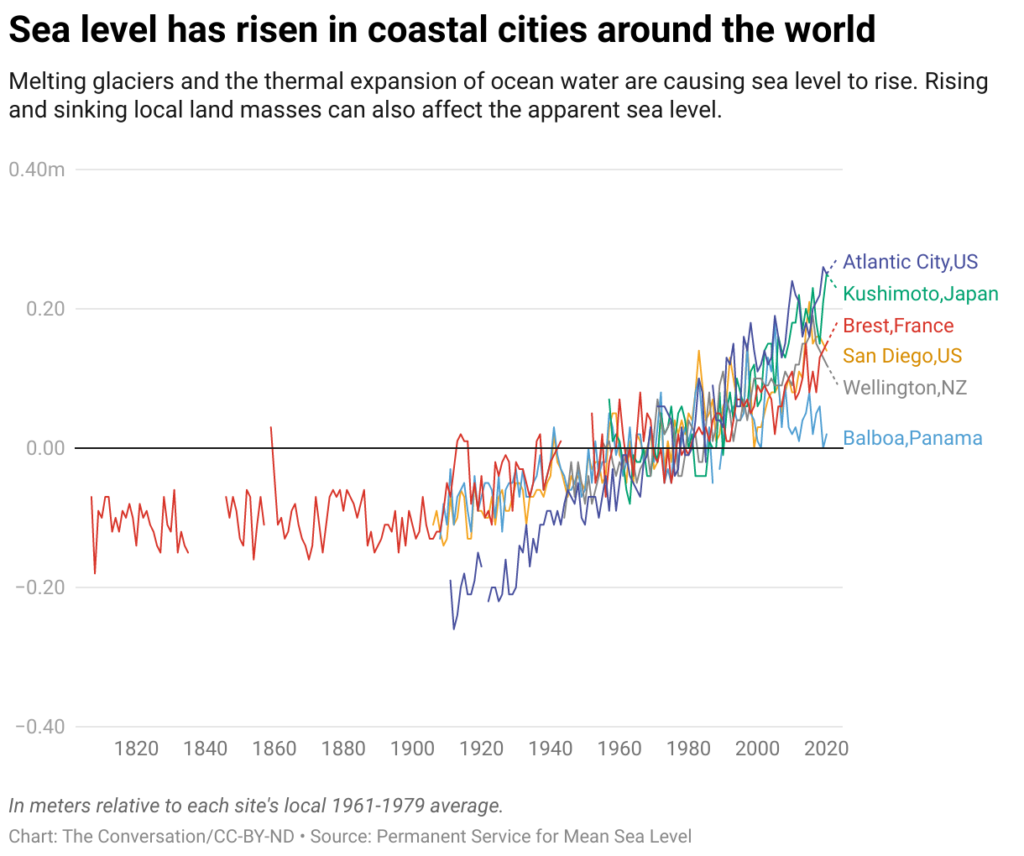 While extreme events are often due to complex sets of causes, some are exacerbated by climate change. Just as coastal flooding can be made worse by rising ocean levels, heat waves are more damaging with higher baseline temperatures.

Climate scientists work hard to estimate future changes as a result of increased carbon dioxide and other expected changes, such as world population. It’s clear that temperatures will increase and precipitation will change. The exact magnitude of change depends on many interacting factors. 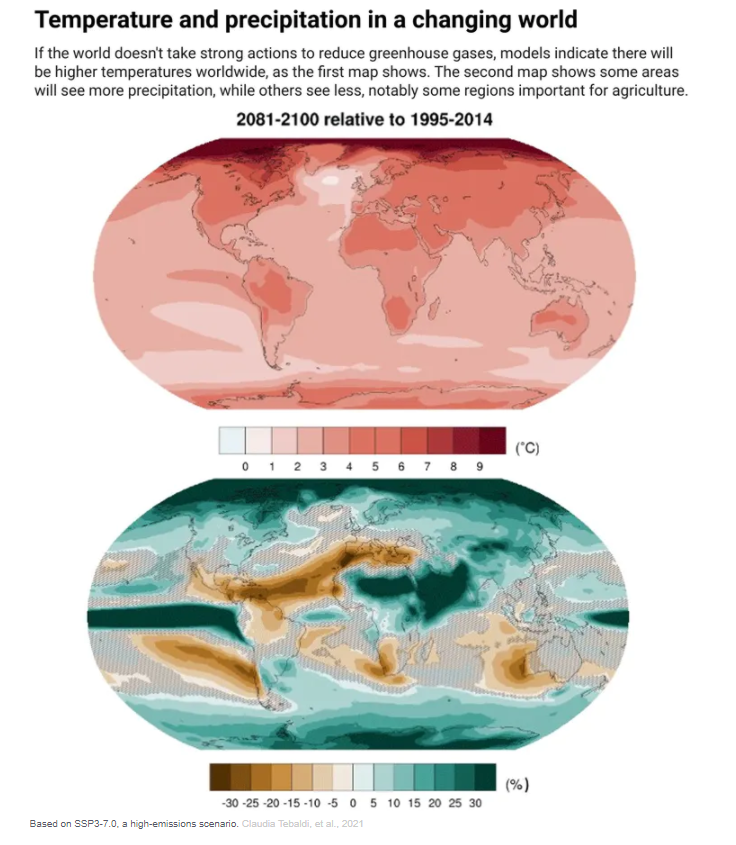 A few reasons for hope

On a hopeful note, scientific research is improving our understanding of climate and the complex Earth system, identifying the most vulnerable areas and guiding efforts to reduce the drivers of climate change. Work on renewable energy and alternative energy sources, as well as ways to capture carbon from industries or from the air, are producing more options for a better prepared society.

At the same time, people are learning about how they can reduce their own impact, with the growing understanding that a globally coordinated effort is required to have a significant impact. Electric vehicles, as well as solar and wind power, are growing at previously unthinkable rates. More people are showing a willingness to adopt new strategies to use energy more efficiently, consume more sustainably and choose renewable energy.

Scientists increasingly recognize that shifting away from fossil fuels has additional benefits, including improved air quality for human health and ecosystems.

This article was originally published in The Conversation.

Photo by Matt Palmer on Unsplash.

Is there a ‘right to disobey’?

One of the first moves of the newly elected Whitlam Labor government in December 1972 was to free seven men imprisoned for their bel...

END_OF_DOCUMENT_TOKEN_TO_BE_REPLACED

How the world’s fossil fuel addiction compromises our health

Climate change threatens to undermine the health of people around the world, with more intense and frequent extreme weather even...

END_OF_DOCUMENT_TOKEN_TO_BE_REPLACED

As the need to cut greenhouse gas emissions becomes increasingly urgent, governments of all levels, as well as private businesse...

END_OF_DOCUMENT_TOKEN_TO_BE_REPLACED

Our window is closing on a liveable future

END_OF_DOCUMENT_TOKEN_TO_BE_REPLACED

Projected global warming under current global emissions reduction policies will leave many of our region’s human and natural systems at...

END_OF_DOCUMENT_TOKEN_TO_BE_REPLACED

“A lie can travel halfway around the world before the truth can get its boots on.” This quote appears in many forms. In some var...

END_OF_DOCUMENT_TOKEN_TO_BE_REPLACED

Dollar signs of the times: Big business and climate change

The upcoming Glasgow Climate Change Conference will feature presentations from many politicians, experts and consultants, but it is unl...

END_OF_DOCUMENT_TOKEN_TO_BE_REPLACED

The climate change debate will not be settled by science, but by money

The intense debate over what is dubbed 'climate science' is showing no signs of easing off. It remains one of the hottest political iss...

END_OF_DOCUMENT_TOKEN_TO_BE_REPLACED

Widespread scientific literacy – in schools and the wider community – is an essential part of any action plan to mitigate climate chang...