‘Infiltrate, Impact, Impel’: Raising up Christians for the Liberal Party

Upon signing up as a member of the Liberal Party in Victoria, some churchgoers have been handed a one-page document with the title ‘Political Participation for Godly good’, according to a Liberal Party member.

The document (see image below) provides a flowchart matrix to guide new members on how they can participate in their local branch meetings, known as State Electorate Convention and Federal Electorate Convention meetings. It also details how they can influence the party’s State Council and State Assembly. In the top right-hand corner appears the italicised motto: Infiltrate, Impact, Impel.

A timeline is provided for how new members can help the cause. After one-and-a-half months as a member, the document says they can: vote at their branch meetings for State Council delegates and State Assembly delegates; or nominate as a delegate to the State Council and State Assembly, where they can influence administration and committee positions.

After more than two years of continuous membership, the member can pre-select “Good Godly candidates” in their electorates. In a bubble quote nearby, the importance of this step is made clear: “This is where we impact the most for good”. At this third stage in the flow chart, the motto, Infiltrate, Impact, Impel, is repeated. 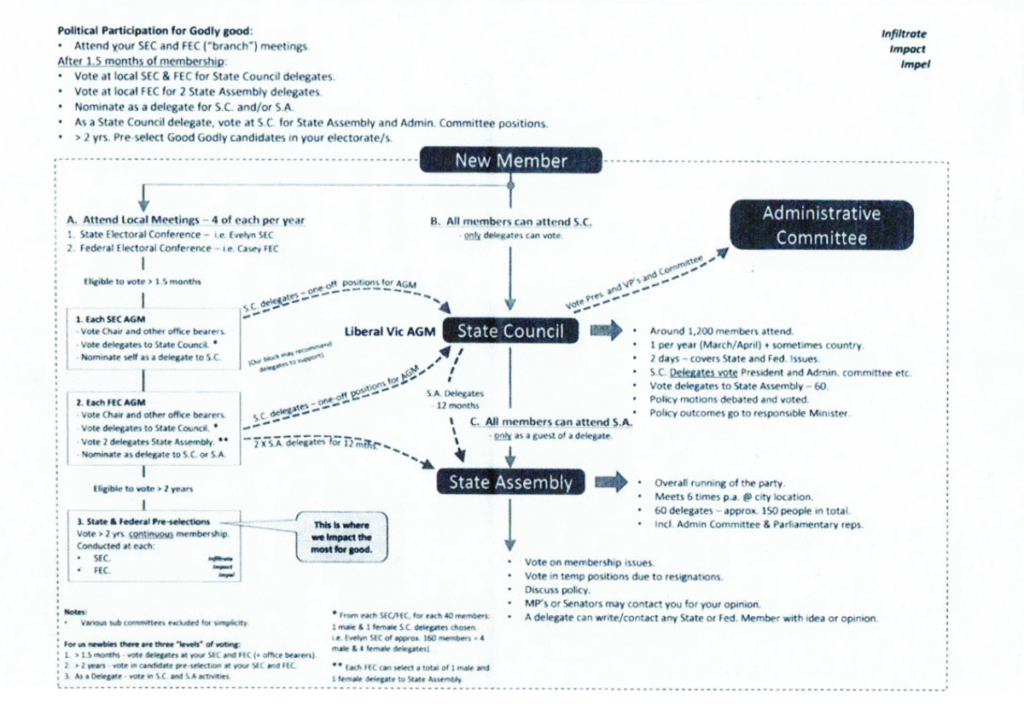 Such recruiting efforts would not be unique to Victoria. Across a number of states in recent years, right-wing Christians have been accused of targeting churchgoers in an attempt to preselect like-minded people as candidates and to influence policy.

In the lead-up to this year’s state election loss in South Australia, Liberal Party moderates warned that the influx of Pentecostal members to party branches, reportedly driven by the right-wing faction and Christian politicians such as Senator Alex Antic, would destroy the party’s chances and make it “unelectable”.

In Western Australia, where the Liberals were almost wiped out at last year’s state election, one of the few survivors, David Honey, directed much of the blame on the actions of right-wing Christian churches for “weaponising” their memberships to dominate branches and preselections.

Ahead of next month’s state election in Victoria, the state’s Liberal Party, under the leadership of Matthew Guy, has its work cut out in attempting to win government from the Labor Party. Yet the Opposition Leader has been contending with headline after headline about candidates who have links with conservative church groups.

In August, Reason Party leader Fiona Patten and Greens leader Samantha Ratnam warned of the threat posed to the state’s widely popular social reforms, such as voluntary assisted dying and abortion rights, if some of these Liberal candidates were to be elected to the parliament.

After narrowly losing a preselection battle to Pentecostal church member Renee Heath, Liberal upper-house member Cathrine Burnett-Wake went even further in her final parliamentary speech, warning Victorians to wake up to the threat that “extremists” and “cults” posed to democracy.

Since Heath won preselection in July, Guy has tried to distance the candidate from her father’s church, City Builders Church, located in Sale, Gippsland. The church has a record of campaigning against same-sex marriage and abortion rights, and has been accused of having links to an external gay-conversion therapy program – the no-longer-operating Living Waters Program.

According to an ABC investigation, local Liberal Party members in Gippsland have alleged that City Builders Church spent three years working with allied churches to take over party branches. Party members told the ABC that the decline of the Liberal Party’s traditional membership base and low membership numbers had made its branches vulnerable to influxes of members from church communities.

In sermons early last year, Heath’s father, Pastor Brian, told his congregation that governments were passing “radical left-wing anti-Christ” laws, but that God would turn things around through “churches just like this”.

“This church is here to affect every domain of society. No longer are we going to see ungodly flakey leaders put into political positions to pass ungodly laws. We’re going to have people like you, and you, and you – and whoever else puts their hand up and says, ‘I’m going to be counted’. I tell you: this is what we’re about,” he said.

In November last year, Pastor Brian, told a webinar how people in his family and around him had become engaged in the political arena, with a “jolt” from God pushing the church out of its four walls and into the “marketplace”. “The last seven or eight years in our nation, there have been so many controversial issues that have been raised that cause people like us to react,” he said.

Heath’s father, Pastor Brian, told his congregation that governments were passing “radical left-wing anti-Christ” laws, but that God would turn things around through “churches just like this”.

The webinar was held just days after The Age reported that Renee Heath, then a member of the Liberal Party’s administrative committee, was being touted as a potential candidate for a seat in the lower house. When asked about his influence on his kids and “in particular, the daughter in politics”, Pastor Brian, who was himself a candidate for Family First at the 2016 federal election, said that he leads by example.

In the webinar, Pastor Brian also talked about how his church had become an “entrepreneurial hub” and a “training centre” in the region, and was about to enter an “incredibly interesting realm”.

“We are not a massive church but we have a whole lot of people involved in the political, not just one party but many parties. And that’s a good thing. We have many people who are in business, and I’m like a coach to them. And we have many people in areas like media and education, as well.”

Renee Heath has rejected suggestions that she would be the same as her father, and said she respects separation of church and state. But she declined to tell the ABC what her positions were on social issues such as abortion rights and same-sex marriage.

Among other new Liberal candidates with church links who, in August, declined to tell The Age their views on abortion and voluntary assisted dying were Anne-Marie Hermans (a former Family First candidate), Moira Deeming (who has denounced abortion), Nicole Werner (a former pastor at Pentecostal megachurch Planetshakers), Briony Hutton (of Gateway Church) and Cynthia Watson (a prominent Mormon).

Rationale is not suggesting that the allegations of branch stacking are true, but that Liberal Party members themselves are making the claims.

The situation is causing tensions to spill out into the open, with a lurch to the right making some moderates worried about the party’s future and the prospects for electoral success.

On the Mornington Peninsula, the local media has, in recent weeks, reported on a “turf war” splitting the Liberal Party membership, with accusations of a “religious far right” takeover at the centre of the tensions.

In 2019, local government councillor Steve Holland sounded the alarm about possible branch stacking. An ensuing investigation resulted in the expulsion of 150 members. During recent weeks, he has warned that good people would continue to be “driven away” from the party.

“What is happening within the Liberal Party at the moment can be described as a turf war on a sinking continent. Successive state and federal election results in Victoria have highlighted the dire situation the party is in when it comes to appealing to the electorate,” he said.

As Holland also pointed out, however, it can be difficult to know where to draw the line between what can be considered as genuine membership recruitment and branch stacking. Yet there is no doubt that leading voices of the Christian right have been calling on church communities to get involved in political parties to help turn the tide on the progressive policy gains of recent years.

In late 2019, then-Liberal Senator Concetta Fierravanti-Wells – a Catholic – spoke to a function hosted by a group called Australian Christian Alliance. A standee banner located next to her on the stage outlined the group’s mission, including, “Enlisting People to bring Christ into the Political Process”.

In her impassioned speech, Senator Fierravanti-Wells pointed out that, of New South Wales’ population of eight million people, only 30,000 people are involved in political parties and, of those, only 500-1,000 are really active in each party.

“Therefore, I say to you: If you want more politicians in Macquarie Street and in Canberra that reflect your values and beliefs, then you have to be active. You have to be involved. You have to join a political party so that those political parties, when they make those decisions about issues that are of importance to you, there will be people in their ranks who actually reflect the views of the silent majority,” she said.

“I urge you to pray. Prayer is important, but prayer is not going to change the views of government. Cold hard numbers and votes is what changes political opinion.”

The theme has also been a major focus of ‘Church & State’ conferences in recent years. Don’t be confused, though. The event is not about the separation of church and state; it’s about the marrying of the two. The event logo even displays seven mountains in apparent reference to the fundamentalist Seven Mountains Mandate ideology, which seeks to achieve Christian control of the major institutions of society.

At the 2021 conference, the Australian Christian Lobby’s Martyn Iles talked about the need for Christians to get involved in parties and gave the example of how progressive politicians had swung the Labor party to the left. “Can you go the other way in any party? Can you make the Greens a Christian party? Yeah, you know what? You can. If all the Christians in Australia signed up for the Greens tomorrow, they’d be having worship services with Greens banners up tomorrow,” he said.

Next week, the ‘Church & State’ conference is being held again – this time in Adelaide. It is being billed as ‘An Essential Event for Christians Wanting Righteous Government’ and aims to encourage “Christians in every electorate to carefully steward political influence as Jesus would in our place – without blind loyalty to any politician or party.” Liberal Senator Antic is the guest speaker.

Even if members of the Christian right were successful at infiltrating Liberal Party branches, the extent to which they could make an impact or even impel governments would remain, ultimately, a matter for the voting public. But, at the very least, voters in these electorates deserve to know the extent to which religious ideology – especially more extreme variants – shapes such candidates’ views on important issues.

If you wish to republish this original article, please attribute to Rationale. Click here to find out more about republishing under Creative Commons.

Tags:
Christian right, Liberal Party
Newer How Hitler conspiracies and other Holocaust disinformation undermine democratic institutions
Back to list
Older In the Defence Force, religion is a barrier to care – and it shouldn’t be

Raised in her father’s church

In 2019, when Clare Heath-McIvor wrote on her blog about why she wasn’t a dominionist anymore, she recalled that her entire chur...

END_OF_DOCUMENT_TOKEN_TO_BE_REPLACED

“The duty of an Opposition is to oppose” – attributed to Lord Randolph Churchill – is one of those quotations I remember seeing on exam...

END_OF_DOCUMENT_TOKEN_TO_BE_REPLACED

Is Christian nationalism being written out of the 6 January story?

When they entered the Senate chamber on 6 January 2021, a group of insurgents stopped and bowed their heads in prayer to consecr...

END_OF_DOCUMENT_TOKEN_TO_BE_REPLACED

Letters to the Editor

With Sussan, the numbers don’t add up

Editor’s note: If you would like to submit a letter for possible publication, please email it to editor@rationalist.com.au. See our ...

END_OF_DOCUMENT_TOKEN_TO_BE_REPLACED

Christian right lobby groups now have the Liberal Party they want – a lot more conservative and no doubt a lot more favourable to their...